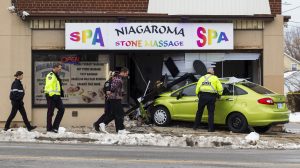 Julie Jocsak was out on assignment when the allure of flashing lights drew her to the scene of a tragic developing story. A car was perched curiously on a sidewalk, its hood tangled in glass and metal after breaching a storefront. As Jocsak got down to work, the police led a man in cuffs across the wreckage. Elsewhere, a woman was dying after being struck inside the building. The resulting image captured virtually everything, telling a powerful story of horrific consequences in a single haunting frame. 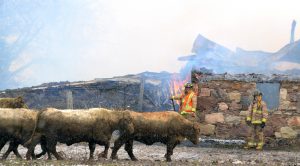 Photographer Galen Simmons arrived at a fire to a scene of devastation: a scorched cattle barn on a cold, windy night. In challenging and dynamic circumstances, Simmons captured a brilliant image that shows spooked, surviving livestock being herded to safety. Two firefighters stand in the background, with poise and a smile, surveying the scene. The light of the flames and the haze of the smoke add drama and draw you in to share the moment.

It was all down to a few seconds. After three hours staked outside a courthouse, that’s all Terry Bridge would have to photograph a man being escorted to prison after his sentencing, which followed a clutch of convictions at two different courthouses. Two days later, Bridge set himself up for a similar shot after another conviction. The resulting photographs are classics of the perp-walk genre, but the expressive faces – on both cop and criminal – invite not only smug judgment, but curiosity and empathy.