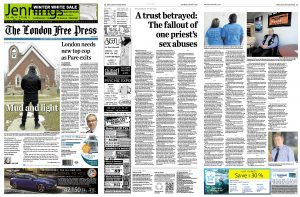 This portfolio illustrates what great local court reporting should be, using court as a springboard to tell bigger stories, more fully told in extensive interviews outside the courtroom. Jane covered the trial of a longtime Anglican priest in the Chippewas-of-the-Thames First Nation, using it to inform coverage of the toll the pedophile took on the community. Her reportage and writing is haunting, and there is artistry in her observational detail. Jane also knows to portray the starkness of important proceedings by getting out of the way and letting the reportage do the work. Such excellent court feature writing — London is lucky to have it.

When a teenage boy is found hanging in the backyard of a facility entrusted with his care, and his body is not found for six months, the local newspaper has serious work to do. It needs to deliver a richly-reported piece on what went wrong, but it also needs to give voice to those who cared most. Nicole did this for Devon Freeman and his family. Working on the story for more than a year, Nicole pulled the family’s anguished questions and insights into a compelling narrative, pulling in public policy but not letting it eclipse a highly emotive human loss.

The Star did a great public service in publishing a deeply reported piece about an unknown woman’s suicide — a seemingly ordinary death that would have gone unnoticed, but for Dave’s dogged reporting. The story centres on a family’s struggle to help their adult daughter, exploring the complications of geographic distance and the self-edited version of life being fed to them by an adult determined to keep desperately worried parents at bay. This well-told story delivers haunting lessons and will prove difficult for readers to forget.