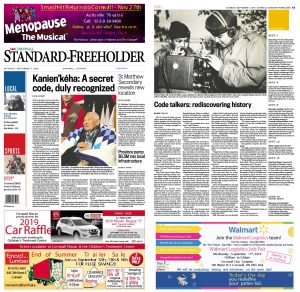 Nick Dunne’s two-part feature on the last known Mohawk-speaking code talker, Levi Oates, who died a year ago, is a wonderful and unusual piece of feature writing. It is a challenge to tell the story of someone the journalist can’t possibly meet and speak with. It takes immense curiosity and deftness as a reporter to tell well the story of a person who has died. The story Dunne does uncover about Oakes is enthralling and beautifully written, and its significance is perfectly framed. How much the reporter believed in the importance of telling Oakes’ story really shines through.

Crosier’s feature on the city’s 911 call dispatchers succeeds not because the idea itself is so unusual, but because she took a workaday theme people likely don’t spend a lot of time thinking about, and elevated it with diligent reporting and pitch-perfect storytelling devices. Restrained and careful not to overwrite, Crosier captured the intensity and importance of the work being done and lifted the curtain on a job we don’t get to see, yet affects us all, and the toll it can take on those who do it. Throughout the piece, she decided to lean on the subjects themselves to amplify their stories, a thoughtful and effective choice, resulting in an immersive piece of storytelling that is one of the best examples of “show, don’t tell.”

Kennedy is an obvious feature writing talent with great breadth and range. His piece on former baseball player and broadcaster Bill White was a treat to read and not the typical adulatory take on an athlete; his story about an old piano was full of charm and delight; and his piece on Don Cherry and the decision to tell it when he did was smartly opportunistic. Kennedy’s whole entry was a pleasure to read.