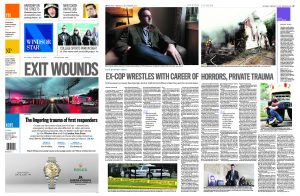 Trevor Wilhelm’s feature on first responders and post-traumatic stress disorder is the kind of story that sticks with a reader for days. It’s clear that former police officer William Donnelly trusted him, and as a result the story has an intimate quality that is revelatory and deeply moving. Harrowing details stand on their own. Well-chosen quotes speak volumes. It takes experience and confidence to keep the writing spare, and to let the subject set the pace. Wilhelm succeeds at both in this truly memorable feature.

Natalie Paddon immediately sets the tone for her gripping feature on Emily O’Brien, a young Hamilton woman caught smuggling drugs into Canada five years ago. She hooks readers by bringing them right into the heart-pounding moment when she’s stopped, before zooming out to show how she got there. It’s a chilling tale, because Emily is not extraordinary, and her story could be anyone’s. Paddon rightly relies on Emily as the backbone of her story, but also shines a light on the broader issue. Ultimately, this is a cautionary tale, but in Paddon’s telling, it’s also a story of redemption and hope.

Joel Rubinoff’s profile of graphic artist Seth is also, as the headline says of his subject, original. It’s an engaging mix of observation and interview that makes readers feel as though they’re part of the conversation. Rubinoff also manages to pull off a tricky feat: the story enlightens the superfan, not just someone unfamiliar with the artist, and does so without insulting either. All in all, Rubinoff elevates the artist profile/event set-up with a piece that is thoughtful, insightful and, skillfully, ahem, drawn.