Winner: Randy Richmond, London Free Press – We Are the Cops 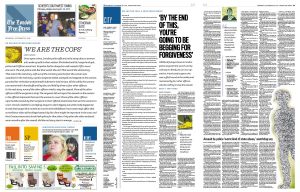 This series exposing police misbehaviour is a perfect example of why the public needs vigorous media oversight of public officials and their conduct.

Over a year in the making, Richmond’s investigation is a riveting narrative revealing how easy it is for police to abuse defenseless victims, and how difficult it is to expose misconduct.

None of the real story – the police assault of a victim, the complicity of the other officers, the subsequent cover-up, a dying lawyer’s efforts, the resilience of a woman struggling with mental illness, the hesitancy of the Crown to pursue the truth – would have been revealed if not for Richmond’s investigation.

The series had an immediate and significant impact. The day after publication, police announced the force would develop and implement new regulations on internal reporting of misconduct, protection for whistleblowers and education sessions on proper workplace culture.

Hollywood could not spin a more compelling yet tragic tale.

In seconds before collapsing and later dying, a severely burned man fleeing his blazing home appears on his neighbour’s doorstep and names his killer.

The two-part investigation uncovered exclusive details about the crime, the subsequent investigation, and detailed the lives of two victims and the man charged with first-degree murder.

Clairmont and O’Reilly worked for months mining sources and social media, and poring over public records. By the time charges were laid, they had already amassed a file on the perpetrator – a challenging task because of the secrecy surrounding the investigation.

This series is an explanatory voyage through the Byzantine bureaucracy of government housing programs and the crisis that left over 15,000 people on a waiting list in Hamilton.

In the first story, Buist walked readers step-by-step through the historical context – government cutbacks, gentrification that led to a spike in real estate prices, and a lack of apartment construction by the private sector.

Next came Van Dongen’s in-depth look at the city’s government-owned housing corporation, which revealed building condition assessments and the corporation’s inability to even keep up with emergency repairs.

The series is a shining example of public service journalism.