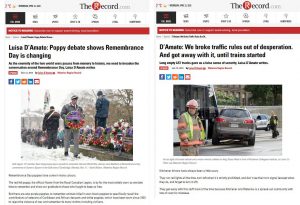 If there is any silver lining to be found amongst the storm clouds that continue to cast a gloom over the news business, it’s that relatively small and local papers are refocusing their efforts on connecting with their readers and their communities as only they can. And so if there is an overarching theme to this year’s entries for Columns/Opinion writing, it’s not just that “the personal is political”, but rather that the personal and the political, and the local and the global, are joined in myriad ways. All three of this year’s finalists have an intuitive grasp of this fundamental character of community and connection.

As always, columnist and critic Joel Rubinoff of the Waterloo Region Record for 30 years brings his light touch, along with easy humour and optimism, to some deeply personal subjects, including the progression of his father’s Alzheimer’s disease and the challenges of raising a son with autism.

In a similar vein, Postmedia’s Robin Baranyai writes smart and cliche-free columns drawing links between local issues and broader political trends. Her piece about the Ford government’s cuts to the 50 Million Trees Program is a case in point, while her column drawing attention to the crisis of Syrian refugees in Turkey has a sharp, personal dimension. But it is her examination of independence (hers, not her kids’) as a process that will strike a chord with any empty-nesters out there.

But in the end, our winner is the Waterloo Region Record’s Luisa D’Amato, who understands that a columnist best serves her community when she confronts its conflicts and divisions head on and challenges the received wisdom. Two of the best in this vein are her call for a more expansive understanding of Remembrance Day and its traditions, along with her (successful) demand for action on a stalled safe injection site.  Congratulations, Luisa, and to all who continue to shine a light.