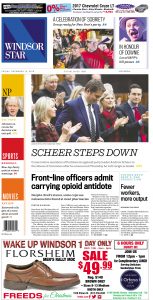 Trevor Wilhelm of the Windsor Star captured first place in this extremely competitive category. His vivid writing and obvious reporting chops on emergency services and vulnerable people served to set his work apart. He showed enterprise in tackling an uncooperative police force on the issue of officers carrying naloxone kits, and found compelling characters to animate stories on what could be routine topics such as organ donation, homelessness and alcoholism. His story choices are clearly prioritized based on a knowledge of the biggest issues facing his city, and he executes them with care and determination.

Nicole O’Reilly of The Hamilton Spectator sharply draws the characters at the centre of compelling court and crime stories with a steady and talented hand. Whether it is making sure victims are known to her community, or her work on a database looking at a decade’s worth of homicides, she can effectively deliver both big-picture and more granular work.

The expertise of the London Free Press’s Jane Sims is a gift to her readers, as she provides larger context and insight to covering crime and the courts. She elevates her writing with comprehensive research that is uncommon for reporters covering this beat.